Hello there I am back!! 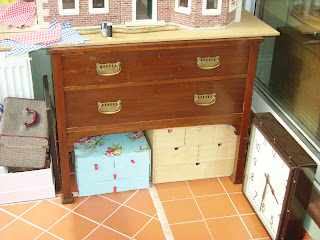 I will start my post with some of the bargains we have had from the auction since my absence. We have had the best bargains in the last couple of weeks but havent taken any pics of them yet. This little set of arts and crafts drawers were £5 you would weep if you saw the stuff that people dont even buy but I just dont have the room to store it. I have all my material in these as well as the bookcase cupboards in the conservatory. The clock has been waiting to go on the wall since before Easter. 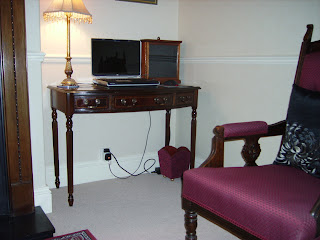 This little desk was a bargain and we will use it for the computer once I have found a piano stool at the auction to sit on. 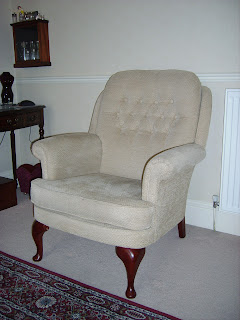 This is my auction bargain which is lovely and wide and really comfortable I would like to change the front legs but cant this is going to the upholsterer soon and will be covered in a grey deco type material for the back room - it was £18 and is better than the one in the Laura Ashley sale at £680! 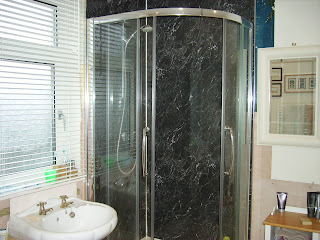 The above pic is for Marmalade Rose who wanted to see the shower we had fitted before Xmas. The bathrooom is still bare walls and the new bath is in. The old sink and basin are left in place at the moment. The DIY has been held up here - Alan spent 5 weekends on the trot trying to fix his leaking waterfall he eventually gave up and now we have a one layer waterfall instead of three! Then he tiled round the bath - lovely and now he is slowly adding the panelling to the lower half of the wall. Then I have the task of deciding what colour and deco to do. The shower is lovely and a pleasure to use. Its amazing how you get used to living like this! and we still have no stair carpet down though it is now paid for !
Sorry to have been away so long. It's been a bit harrowing here - Dad has been told his cancer is now aggressive so we are spending as much time as possible with him - he seems fine but tires very easily. His favourite times are when any of his family visit - he perks up so much. Outwardly he appears to be OK but Mam says he sleeps quite a lot some days - he is not in any pain at the moment but has been told that he has months not years. My Mam is handling it a lot better than I thought she would and remaining cheerful - though goodness knows what she feels in those quiet moments on her own. We have told the kids - because they aren't kids anymore. Adam and Vicky have been great - they are visiting and talking to them about the wedding. We know Dad will make that date definitely and he and Mam have their clothes sorted for the 'do'.

Likewise I have my outfit for the day and another dress for the night do the following day. I went to Ann Harvey in York where they cater for the larger lady!! I am really pleased with what I have got - a cerise pink silk jacket, very fitted with 3/4 sleeves. The dress is a pink and aubergine circly pattern. I have pink strappy sandals and will get a bag in our local shop which I saw last week. The night time dress is navy with a sort of cummerbund in the same and I am looking for a silk warp to cover my fat arms!! My daughter told me she will put tan on me (she is insisting I dont show my legs on the day without it!) and has bought me a very light tan cream which we will experiment with shortly. Had a perm last week so it will be good on the day and my hairdresser will come on the morning and do it for me - I am really excited now and so looking forward to it.

There is some cheery news on the job front. My colleague and I are still waiting from March 4th to know what is happening with our jobs and have been told it will be September before we find out. In the meantime a couple of weeks ago it was decided that the new Chief Executive Officer of the Tourism Partnerships needed some help until the posts in her time are advertised and filled. I let it be known that I was very interested in being seconded and it has happened. So last Monday I started working in Thirsk, its about 15 mins from home and is the town where the vet James Herriot had his practice (it is now a lovely visitor attraction) I am working in the market place above the Tourist Information Centre and everyone is lovely I am so happy to be there. I would like to get one of the jobs that will be advertised if possible - they are a great team and the new CEO is an American lady who is so enthusiastic and works so hard. She has been working on the English Riviera for three years and before that Wales. It is such a positive place to be not like where I normally work. My poor colleague is missing me a lot and wanting to follow me!

It is lovely to have you back. The shower looks great.
Can't wait to see lots of wedding photos, your outfit sound lovely. Are you going to have a hat too?
I'll keep my fingers crossed for your job.
love Fi x

Great to see you back - thanks for your lovely comments - your new job sounds great hope you can stay there. Your wedding outfit sounds lovely - hope you all have a super day:)

I'm glad to see you back after a long absence. All the best for the wedding, hope you have a lovely day.

LOVELY BARGAINS!
SAD TO HEAR ABOUT YOUR DAD... HOPE THAT HE ISN`T IN MUCH PAIN!
BEST WISHES TO HIM,
DEBBIE MOSS

Blimey Catherine how times flies!
I have not been here for a while.
The shower looks good and roomy! I do like a big one....I am hankering adter a little slipper bath though!
Great bargains.
Sorry to hear about your Dad, I do sympathise with you, at this moment I am trying to be with and help a lot more with my parents.
Being a support and trying to remain positive can be very draining.
Looking forward to the wedding pic's.
Cx

Alchamillamolly
Northallerton, North Yorkshire, United Kingdom
Hi my name is Catherine and I am 57. I am a full time working Mum, married to Alan with Adam 29, Kate 27 and David 25. We live in the market town of Northallerton in North Yorkshire. My husband retired 18 months ago and at first seemed to think that being a 'house-husband' means being a TV critic!! He is now in a routine and can be officially called a 'house husband'. I am amazed at the amount of people like me who can fall for a piece of fabric or cup and saucer like a first love!! Blogging has opened my world to so many lovely and talented people and I am continually inspired to visit all the lovely places in the UK that they all live. I don't have time to update much plus I don't lead a very exciting life but the time I do get on the PC is spent reading about others.